You can choose from many options to create your custom artwork with the Chinese character / Asian symbol / Japanese Kanji for water on a wall scroll or portrait.
Start by clicking on the button next to your favorite water title below...

4. Drinking the water of a well: One should never forget who dug it

5. Fire and Water Have No Mercy

6. Put out a burning wood cart with a cup of water

9. Not Only Can Water Float A Boat, It Can Sink It Also

(One of the five elements)
shuǐ
mizu / sui
수

水 is the symbol for water in Japanese and Chinese.

象水一樣 is a short quote from a much longer statement by Bruce Lee.

He was summarizing how people should be flexible to all circumstances, attacks, or situations. At the end, he exclaims, "Be like water my friend". 象水一樣 is the, "Be like water" part alone, since that seems to be what most people want.

蟠龍 is sometimes seen as a lower level of dragon, or a dragon that has not-yet-reached its potential.

蟠龍 is often defined as a "lake dragon" that has not ascended to heaven.
Another way to put that is a dragon coiled on the earth, which has not yet ascended to the sky.

Drinking the water of a well: One should never forget who dug it

This proverb suggests that one should always be grateful to those who helped you succeed.

And remember your ancestors and those that came before you whose sacrifices made your present life better.

Some Chinese will separate the intended meaning from this proverb and translate this as "Don't forget the people who once helped you". In Modern China, this idiom is virtually never used to refer to an actual well.

Note: This can be pronounced in Korean but it's not a commonly used phrase.

Fire and Water Have No Mercy

This serves to remind us that the forces of nature are beyond human control.

Some may also translation this as, "implacable fate".

Put out a burning wood cart with a cup of water

杯水車薪 is a warning against a futile effort.

This proverb literally refers to one who is "trying to put out a burning cart of wood with a cup of water", or "throw a cup of water on a cartload of wood". The lesson to be learned is about using the right measure or tool for the job, and not to waste your effort if you are inadequately equipped for the task at hand - in other words the postscript should be "go get a bucket or a fire hose".

This quote is sometimes presented as, "Be like water".

However, this is an ancient quote from the great philosopher Lao Tzu. It basically suggests that the ultimate goodness and purity (in the world) is water. Many take this as a suggestion to be like pure/good water.

Mizu No Kokoro
mizu no kokoro

水の心 is the Japanese Buddhist and martial arts phrase, "mizu no kokoro", which means, "mind like water" or "heart of water".

The phrase is a metaphor describing the pond that clearly reflects it's surroundings when calm but whose images are obscured once a pebble is dropped into its waters.

Not Only Can Water Float A Boat, It Can Sink It Also

Many things have opposite properties. The water you drink can also drown you. Pork may nourish you and keep you alive but under-cook it and it could kill you. Potassium nitrate is often used as a fertilizer to grow the food that sustains us but it's also been used as an explosive to topple buildings and destroy us.

This concept is easily associated with "yin yang" where an element has two opposite properties that are as different as night and day.

This proverb's meaning can be summed up this way: "Anything that can lead you to success may also contain great risks".

This phrase is known in literary circles by Korean people (scholars or literature). It is therefore also a valid proverb in Korean Hanja, though most Koreans would not be able to make sense of it.

Please note that there is an unwritten rule when the same character appears twice in the same phrase, the calligrapher will alter the appearance so that no two characters are exactly alike in the same piece. This calligraphy has two repeating characters that will be written differently than they appear here.

This title for water dragon is the hornless or scaled dragon. 蛟龍 is the king of all aquatic animals with the ability to control rain and floods.

In Japanese, the rain dragon can represent hidden genius. This dragon's domain is the deep murky water, thus with hidden potential. This can also be the Japanese given name Kouryuu.

若水 is part of a very old saying from Lao Tzu.

The literal meaning of the characters is "water ball".

雨 is how to write "rain" in Chinese. If rain is your name or has some significance to you in your life, this is the character you want.

If your name is Varṣā or Varsha, this is how you name translates into Chinese.

風水 is the famous technique and approach to arranging your home externally around natural features, and internally to create balance and peace.

These two characters literally mean "wind water". Obviously, the title is far more simple than the concept behind this subject.

It may enlighten you slightly to know that the character for "wind" can also mean "style", "custom" or "manner" in some context. This may apply somewhat to this title.

In a very technical sense, this title is translated as "Chinese geomancy".

五行 is the title of the five elements which are: wood, fire, water, earth, and metal.

The first character means "5" and the second character is simply "elements".

According to ancient Chinese science, all matter in the world is made up of these elements. One idea presented with the five elements is that when energy is added, matter is believed to expand. When energy is removed, matter contracts. Oddly, this concept is not far from Einstein's theories, and modern science. Just a few thousand years before Einstein.

金木水火土 is a list of the Chinese characters for the five elements in a comfortable order (meaning that they simply "feel right" to a Chinese person who views this arrangement).

Note that sometimes the metal element is translated as gold. And earth refers to soil versus the whole planet earth.

地水火風空 is a little different than the ancient or original Chinese version.

Note: This set of Kanji can also be romanized as "ji sui ka fuu kuu", "jisuikafuukuu", or "jisuikafuku".

These can also be written in the order 地火風水空 (chi ka sui fuu kuu). Let me know when you place your order if you want the Kanji to be in this character order.

In Japanese, this can be a surname when pronounced as Minkou or just Kou.

In Japanese, this can be a surname when pronounced as Sakigawa.

This literally translates as: Troops/soldiers/warriors have no fixed [battlefield] strategy [just as] water has no constant shape [but adapts itself to whatever container it is in].

Figuratively, this means: One should seek to find whatever strategy or method is best suited to resolving each individual problem.

This proverb is about as close as you can get to the military idea of "adapt improvise overcome". This is best way to express that idea in both an ancient way, and a very natural way in Chinese. 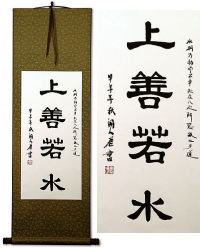 Drinking the Water of a Well, One Should Never Forget Who Dug It
Wall Scroll

Lookup in my Japanese & Chinese Dictionary