Not what you want?

Try other similar-meaning words, fewer words, or just one word.

Enter your email below, and get an automatic notice when results for Strategy are added or updated...

Personalize your custom “Strategy” project by clicking the button next to your favorite “Strategy” title below...

1. Attack When The Enemy Has Low Morale

14. Hunt Foxes with Stealth, Hunt Wolves in the Open

Attack When The Enemy Has Low Morale

This Chinese proverb literally translates as: Avoid [your enemy's] fighting spirit [and] attack [when] his [morale is] declining.

兵在精而不在多將在謀而不在勇 is a proverb that follows one about how it is better to have warriors of quality, rather than just a large quantity of warriors in your army/force.

This came from the Art of War by Chinese strategist and tactician Sun Tzu (Sunzi).

You can think of this as a sort of abbreviation to remind officers and troops how to conduct battle.

The more expanded meaning is supposed to be...

"Swift as the wind, quiet as the forest, fierce as fire, and immovable as a mountain"

"As fast as the wind, as quiet as the forest, as daring as fire, and immovable as the mountain"

"Move as swift as the wind, stay as silent as a forest, attack as fierce as fire, undefeatable defense like a mountain"

棋 is the most simple or generic way to write "chess" in Asia.

棋 is parts of other more specific words for board games of strategy such as the western version of chess, Chinese chess, Weiqi, or Go.

In Japanese, this single character is pronounced "Go" and often refers to the game known in the west as "Go" (not just the 5-in-a-row version but also the complicated encirclement game of strategy known in China as Weiqi).

In Chinese, this can be more ambiguous as to which game of chess you speak.

If you like any version of chess, or games of intense strategy, this can be the character to hang on your wall in your game room.

This literally translates as: Troops/soldiers/warriors have no fixed [battlefield] strategy [just as] water has no constant shape [but adapts itself to whatever container it is in].

Figuratively, this means: One should seek to find whatever strategy or method is best suited to resolving each individual problem.

This proverb is about as close as you can get to the military idea of "adapt improvise overcome". This is best way to express that idea in both an ancient way, and a very natural way in Chinese.

The Game of Weiqi / Weichi / Go

圍棋 is the Chinese title for the ancient game of strategy known as Weiqi or Wei Chi in Chinese, and Go in Japanese.

Note: In Japanese, this game is known by a different single Kanji as seen to the right. If you want this Japanese "Go" character, click the Kanji to the right instead of the button above.

戦機 is a Japanese word that means war machine.

It can also mean the time for battle, military secrets, or battle strategy depending on the context.

It also part of the title of a famous book of tactics by Sun Tzu. 兵法 could also be translated as "military strategy and tactics", "military skills" or "army procedures". If you are a military tactician, this is the wall scroll for you.

This Chinese proverb literally translates as: [Even a general who has won a] hundred victories [may be] hard put to see through the enemy's [strategy], [but one who has] broken [his] arm three [times] [will] be a good doctor.

Figuratively, this means: One cannot always depend on past successes to guarantee future success but one can always learn from lessons drawn from failure.

兵 can be used to express soldiers, troops, a force, an army, weapons, arms, military, warfare, tactics, strategy, or warlike.

The final meaning depends on context. It's also part of the Chinese title for the Terracotta soldiers. In fact, this character is usually used in compound words (words of more than one character). Sometimes this single character is the title used for the pawns in a chess game (in a related issue, this is also a nickname for soldiers with the rank of Private).

孫子兵法 is the full title of the most famous book of military proverbs about warfare.

The English title is "Sun Tzu's The Art of War".

The last two characters have come to be known in the west as "The Art of War" but a better translation would be, "military strategy and tactics", "military skills" or "army procedures".

Note: Sometimes the author's name is Romanized as "Sun Zi" or "Sunzi".

It's written the same in Chinese, Japanese Kanji, and Korean Hanja.

六段 is the Japanese title for the 6th Degree or 6th Level.

This applies mostly to martial arts and earning the title of a 6th-degree black belt.

The first character is simply the number 6.
The second character is "dan" which is often translated at "degree" in the context of Japanese martial arts. 六段 actually means grade, rank, level. When a number is in front like this, it refers to a senior rank in martial arts or games of strategy such as go, shogi, chess, etc.

Art of War: 5 Points of Analysis

It reads like a 5-part military proverb. Sun Tzu says that to sharpen your skills, you must plan. To plan well, you must know your situation. Therefore, you must consider and discuss the following:

1. Philosophy and Politics: Make sure your way or your policy is agreeable among all of your troops (and the citizens of your kingdom as well). For when your soldiers believe in you and your way, they will follow you to their deaths without hesitation, and will not question your orders.

2. Heaven/Sky: Consider climate / weather. This can also mean to consider whether God is smiling on you. In the modern military, this could be waiting for clear skies so that you can have air support for an amphibious landing.

3. Ground/Earth: Consider the terrain in which the battle will take place. This includes analyzing defensible positions, exit routes, and using varying elevation to your advantage. When you plan an ambush, you must know your terrain, and the best location from which to stage that ambush. This knowledge will also help you avoid being ambushed, as you will know where the likely places in which to expect an ambush from your enemy.

4. Leadership: This applies to you as the general, and also to your lieutenants. A leader should be smart and be able to develop good strategies. Leaders should keep their word, and if they break a promise, they should punish themselves as harshly as they would punish subordinates. Leaders should be benevolent to their troops, with almost a fatherly love for them. Leaders must have the ability to make brave and fast decisions. Leaders must have steadfast principles.

5. [Military] Methods: This can also mean laws, rules, principles, model, or system. You must have an efficient organization in place to manage both your troops and supplies. In the modern military, this would be a combination of how your unit is organized, and your SOP (Standard Operating Procedure).

Notes: This is a simplistic translation and explanation. Much more is suggested in the actual text of the Art of War (Bing Fa). It would take a lot of study to master all of these aspects. In fact, these five characters can be compared to the modern military acronyms such as BAMCIS or SMEAC.

CJK notes: I have included the Japanese and Korean pronunciations but in Chinese, Korean and Japanese, this does not make a typical phrase (with subject, verb, and object) it is a list that only someone familiar with Sun Tzu’s writings would understand.

Hunt Foxes with Stealth, Hunt Wolves in the Open

This Chinese proverb literally translates as: Hunt foxes stealthily, [and] hunt wolves openly [just as they themselves do].

This is a suggestion that you should know your enemy, and know that each enemy is different, that therefore requires a specialized approach (attack). 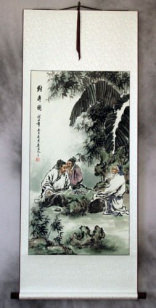 41 people have searched for Strategy in Chinese or Japanese in the past year.
Strategy was last searched for by someone else on Sep 24th, 2020