Personalize your custom “Calm Mind” project by clicking the button next to your favorite “Calm Mind” title below...

3. Keep Calm in Face of Adversity

This can be defined as relief, peace of mind, feeling at ease, to be relieved, set one's mind at rest, easiness.

安心 is a nice word that encompasses great meanings within just two characters. Some of the other meanings include to pacify, to settle the mind, peace of mind, and it's also the idea of feeling a sense of security, safety, and confidence in your state of well-being.

This can be used by everyone, but some consider it to be a Buddhist concept (You'll find it in your Zen dictionary).

虛心坦懐 is a Japanese proverb that means, "with an open and calm mind", "with no preconceived notions", or "without reservations".

In some context it can mean frank or candid.

虚心坦懐 is a Japanese word that means with an open and calm mind.

If you want to remind yourself to approach each situation with no preconceptions, this is a good title for you. This can also refer to the ideas of being candid, frank, and straightforward.

Keep Calm in Face of Adversity

失意泰然 is a very old Japanese proverb that suggests, "keeping calm and collected at times of disappointment", or "maintaining a serene state of mind when faced with adversity".

It's hard to relate individual character meanings into the overall meaning unless you also understand Japanese grammar. The word order is very different than English. That being said, here's the character meaning breakdown:
失 To miss, lose or fail.
意 Feelings, thoughts, meaning.
泰 Safe, peaceful.
然 Like that, in that way, however, although.

Using these definitions in English, we might say, "Although you may fail or lose, have a feeling of peace and calm".

This also has a strong Buddhist association where it can mean "entering into Nirvana". In that context, this is sometimes used to refer to the passing of a Buddhist monk (he is silent, as he has entered Nirvana). For the living, this is about tranquility (especially of mind).

Some will also use this to mean "elegant simplicity".

From Sanskrit, this can represent praśama, vivikta, śānti, or nibbāna (nirvāṇa).

心澄淨 is the Buddhist concept of the pure and calm mind. It is believed that once you achieve a meditative state of pure focused thought, the mind becomes clear and calm. Although, others will say this means that achieving a calm mind will allow you to reach pure thought.

From Sanskrit, this is known as citta-prasāda. The concept of citta-prasāda is sometimes defined as, "clear heart-mind", or "the single and definitive aspiration".

This Chinese and Japanese proverb/word means, "cool and collected", "showing no sign of nerves", "perfectly composed", "having presence of mind", "self-possessed", "imperturbable", and/or "calm and self-possessed".

In Japanese, this word means innocent, or one with no knowledge of good and evil. It literally means "without mind".

無心 is one of the five spirits of the warrior (budo), and is often used as a Japanese martial arts tenet. Under that context, places such as the Budo Dojo define it this way: "No mind, a mind without ego. A mind like a mirror which reflects and dos not judge". The original term was "mushin no shin", meaning, "mind of no mind". It is a state of mind without fear, anger, or anxiety. Mushin is often described by the phrase, "mizu no kokoro", which means, "mind like water". The phrase is a metaphor describing the pond that clearly reflects it's surroundings when calm but whose images are obscured once a pebble is dropped into its waters.

This has a good meaning in conjunction with Chan / Zen Buddhism in Japan. However, out of that context, it means mindlessness or absent-minded. To non-Buddhists in China, this is associated with doing something without thinking.
In Korean, this usually means indifference.

Use caution and know your audience before ordering this selection.

Mizu No Kokoro
mizu no kokoro

水の心 is the Japanese Buddhist and martial arts phrase, "mizu no kokoro", which means, "mind like water" or "heart of water".

The phrase is a metaphor describing the pond that clearly reflects it's surroundings when calm but whose images are obscured once a pebble is dropped into its waters.

不動心 is one of the five spirits of the warrior (budo), and is often used as a Japanese martial arts tenet.

Under that context, places such as the Budo Dojo define it this way: An unshakable mind and an immovable spirit is the state of fudoshin. It is courage and stability displayed both mentally and physically. Rather than indicating rigidity and inflexibility, fudoshin describes a condition that is not easily upset by internal thoughts or external forces. It is capable of receiving a strong attack while retaining composure and balance. It receives and yields lightly, grounds to the earth, and reflects aggression back to the source.

Other translations of this title include imperturbability, steadfastness, keeping a cool head in an emergency, or keeping one's calm (during a fight).

Together, these three Kanji create a title that is defined as "immovable mind" within the context of Japanese martial arts. However, in Chinese it would mean "motionless heart" and in Korean Hanja, "wafting heart" or "floating heart".

靜心 is how to write "peaceful heart" in Chinese.

The first character means peaceful, calm, and quiet. The second means heart but can also mean mind, soul, or spirit.

Because the word for heart / mind / soul is interchangeable in Chinese, this can also be translated as "a peaceful soul" or "a quiet mind".

I have also seen this translated as "placid temperament" or "spirit of serenity", especially from Japanese.

While they once used the same first character form in Japan, they now use a slightly-simplified version in modern Japan (after WWII). This version is shown to the right, and can be selected for your wall scroll by clicking on that Kanji instead of the button above. 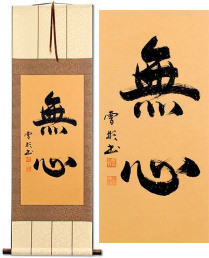 104 people have searched for Calm Mind in Chinese or Japanese in the past year.
Calm Mind was last searched for by someone else on Sep 25th, 2021