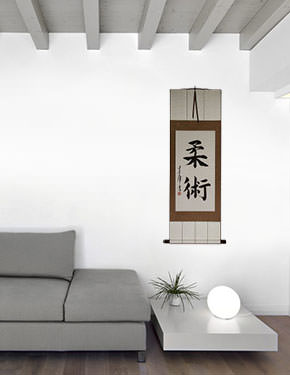 This calligraphy artwork will look great in your home or office.

Information about caring for your wall scroll
See Larger Image

My modern Japanese dictionary defines this term as "assassination, stealth and combat techniques", or "fighting art of the ninja".

This is a much maligned title in Japanese, where some argue as to whether "real" Ninjutsu exists or can exist anymore. For others, devout to the cause of passing on the techniques and training of Ninjutsu, this title means everything. For those, practicing Ninjutsu equates to preserving a sacred trust.

Bishou was born and raised in Nara, Japan. She began her studies of Calligraphy at the age of four at Baikou Calligraphy School. When Bishou was 25 years old, she received a membership to the Tenshin Kai (calligraphy society) and her life as a calligrapher began. Bishou progressed to the next level, becoming a member of the Cho-ko Guild which is the most prestigious calligraphy society in Japan. During her apprenticeship, she taught calligraphy and studied the art of Japanese silk scroll making (hyougu) at Mizuno Hyougu-ten.

A sample of her work:
Bushido - Kaisho style

In 1998, Master Calligrapher Bishou Imai was awarded the highest rank in Japanese Calligraphy of Shihan. She currently holds a guild license for teaching both calligraphy and instructing teachers to teach calligraphy.

In Addition to being a calligrapher, she is also an "artisan artist" (Hyougushi).

is how Bishou is written. This name means "Beautiful Cliff/Mountain". You will see these characters signed just before the red signature stamp on her calligraphy pieces.